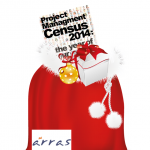 The first prize draw for the Project Management Census takes place on Monday 16th December – have you taken part yet? The first prize out of Santa’s sack is an iPad Mini courtesy of us – Arras People. The PM Census is open to anyone across the globe who is interested in project management. There are options in the census for people who are current practitioners (PM, Programme Management, PMO etc); hirers of project managers; line managers of PMs; PM software providers; training organisations; professional bodies; students, in fact just about anyone who has anything to do with project management. In this year’s PM Census we have a lot of questions about your career in project management – it actually makes an interesting read doing this Census too To be in with a chance of winning the iPad Mini > Take the Census before Monday 16th December Good luck!             Further Prizes Throughout the PM Census Period Take a look at the website for the dates of future prize draws – the earlier you take part in the Census the more chances you have of winning:

View my Flipboard Magazine.
Lindsay Scott of PMOFlashMob guest hosts this week's #PMChat! Fresh from the PMO Symposium..Join Us!
WPF
A Global Conversation on technology, project management and more!